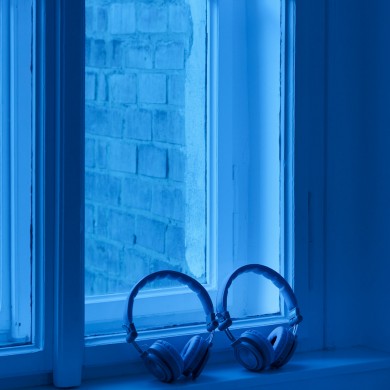 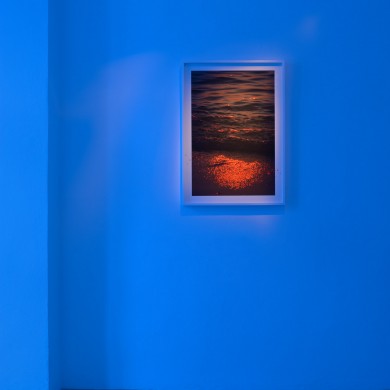 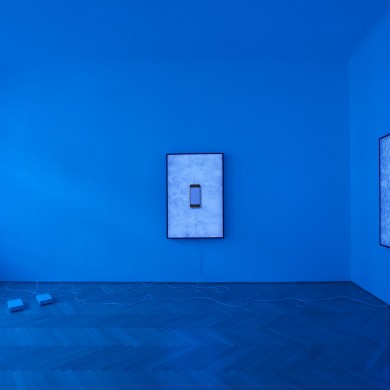 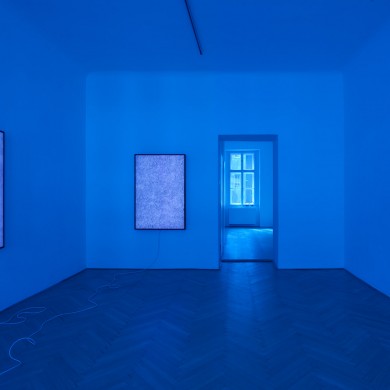 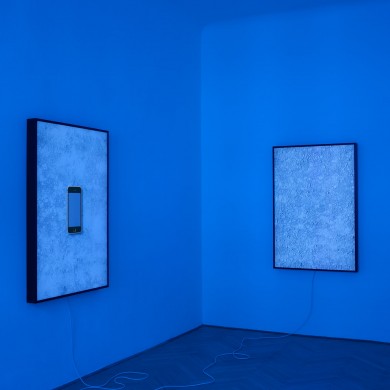 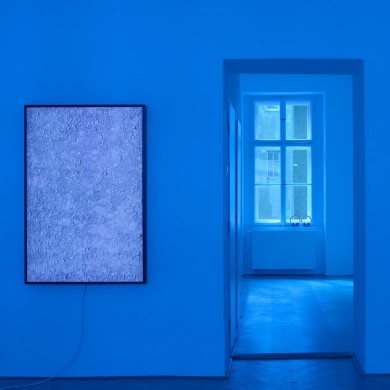 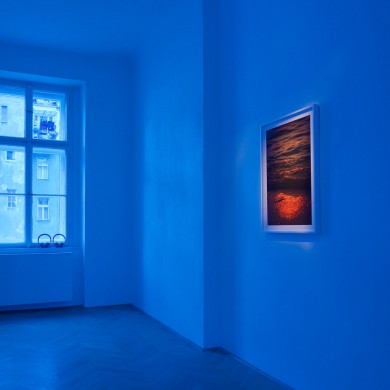 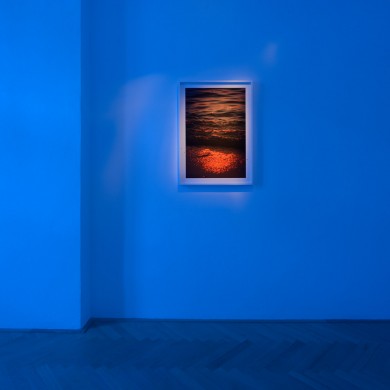 I ring the bell. It buzzes for a few seconds. I enter the old apartment house and go up the stairs to the second floor. A woman opens the door and invites me in. I step onto a glazed porch with a view of a courtyard. She hands me headphones and opens the door to a gallery. Entering, I see that the entire space is inundated with blue light. It pours in everywhere. Otherwise it’s almost empty. Just that there are light photographs hanging on the wall. A view of the sea. Of an undulating marine surface with gleams of light dancing on it. Waves. They are fascinating. The movement that washes everything away.

But these waves are falling like some kind of petrified masses, like a mountain range. I have to think for a while, what it is that disturbs me so much about that. Now I know. It’s what isn’t there. The sunset. It’s entirely different to any time I’ve seen it. The Little Prince’s words come up in display in my mind. “Once I saw the sun set forty three times.”  (1)  People say it’s the visual motif that is the greatest cliche and that no one has any use for it any more, because no one can capture it in a way that could make it truly speak to the viewer. But this one goes into hiding and at the same moment shatters under our feet… As if it could touch those waves, that froth, or a chunk of hard matter.

At this point I realise that I’m holding headphones in my hand, so I put them on. A pleasant quiet voice can be heard in them. “It’s raining. Really, it’s raining.” Involuntarily I turn and look in the direction of the street. “It’s impossible to hear it, but when I look out the window, everything so quickly turns gradually dark and begins to gleam. The feeling I have is as if it were falling always in the same way. Or I simply never have any memory, and then again I have the feeling that I’m seeing this for the first time ever in my life.” For a moment there is silence. “And so I’ve never yet been outside when it was raining. I’ve never got wet. Simply, I’ve always been somewhere inside. Kept out of the way, protected.” I am aware that I’m beginning to have a similar feeling about the space that surrounds me. A feeling of safety…  “I know only how it’s falling, and again I feel how the air is changing in the air conditioning. How the air changes in the room, in the car. How it’s growing warm and damp in the vicinity. It’s getting musty.” (2)  At that point the voice whispers: “Are you sleeping?” I turn myself a bit and gaze through space. Are they asking me? Or is there someone else here who’s listening, along with me? The voice narrates further. As if it were returning in time. To childhood.  To a private boarding school. It describes the journey on a family holiday to the sea… At one moment I feel a shock. Maybe some associations. It often happens to me when I’m reading a book. I call it the adventitious root. That moment from which my thoughts flow elsewhere. Maybe the only word which evokes a feeling in me that the voice is speaking to me from somewhere in the future. But those realia, everything it describes, anchor me in the present. Actually, even the feeling I have from that narration is somehow close to me. A feeling of loneliness, of dissociation from reality. Maybe… mainly when it is describing the sea. The sea, which it observes from the window of a hotel room. Have I really not bathed in it? And that photograph on the wall? Has it remained here as a memory? or an unfulfilled desire?

“Are you sleeping?” “No, I’m not sleeping.” I say in my mind, “I’m standing up and listening intently”.

But there’s still one more space here. From the place where I’m standing, an empty space is falling. Blue seems to be still more intensive there. A window opposite seizes my attention. How is it that everything happening outside is falling through that blue? When I enter, my eyes slide onto two large images. Are they photographs? Or video? I wait a while, in case the image moves. No. I come closer and examine the details of a macro camera-shot. It’s not a monitor. Light photograph? Capturing the surface. Its colourfulness depends on plasticity. That one is the most plastic, and it seems that it is darker and has much more shade in it. Conversely, the one beside it is more stuffy and in terms of colour more integral. There’s a telephone lying in it. In the face of reality, it’s more considerable. So smooth and shiny. There’s nothing on it. But it isn’t even switched on. The settings are going. Colour of misfortune. From long-drawn-out lectures I remember the most radiant. There, on that blue clay, it has the effect of a deep dark eye. But it occurs to me whether that clay, if I were to open a window and let in some daylight, would really be blue. With all this concentration my eyes begin to wander. I go towards the window, so as to survey the entire space at a remove. When I turn round, I am looking at the light photograph. That warm light and the sparkling gleams lure me back to myself, and so I return to the image in the first room. I haven’t been there for long when silence ensues. But after a while the voice pipes up again. “Its raining. Really, it’s raining…” and I realise that the story is beginning to play again from the start. I take off the headphones. The silence amazes me. Suddenly I am here alone with the blue space and the petrified sea. I must stay here a while longer and gaze at that strange grey sea…

Finally I leave. I go from the gallery to the illuminated porch. Meanwhile, the outside has somewhat receded. I have a feeling that my eyes have grown a bit accustomed to that blue. I take my leave of the gallerist. When I’m going by her table, I observe that beside the computer there is one more blue display. It’s falling like blue grains of something. I take note of it, but at this stage more peripherally. I go out on the street… and despite everything, it actually is raining… “Always when it’s raining, I reach for my phone. I’m so entertained by the fact that one can see through drops of water. Absolutely I must snap this so that I can ZOOM it. I test whether water is the best. I test other pure liquids. It seems to me that there could be a combination of spirits and water, as a symbolic magician from the digital loneliness of the new Covid world. And besides, there should be a testing of various forms of scattering it. The best is drizzle.” (3) / Nina Moravcová

Jana Bernartová (1983), visual artist, passed through a number of “media” studios in the course of her studies. She commenced her university education at the Faculty of Art and Architecture at the Technical University in Liberec, in Stanislav Zippe’s Visual Communication – Digital Media Studio. Her Master’s study was completed in Václav Stratil’s Intermedia Studio at Brno’s FAVU, and her doctorate in Federico Díaz’s Supermedia Studio in Prague’s UMPRUM. In many ways, the defining moment for her was coming to teach at Liberec University, which gave her a background for working with the most modern technologies, with knowledge of their potencies and limits. It is precisely what is lacking in the digital image – the tension between the virtual world and the lived reality, between data and their material outputs – that represents the central theme of her work hitherto. Jana Bernartová appears in the world of contemporary art not only in the role of artist but also in those of teacher and curator. Since 2016 she has organised the Art Week Liberec international festival. She is Pro-rector for Studies at the Academy of Fine Arts in Prague.

Janek Rous (1981), audiovisual artist, is a graduate of Jiří Příhoda’s Studio of Monumental Art at Prague’s AVU. During his studies he had been active mainly in creating specific situations and interventions in the surrounding environment, but in recent years he has concentrated on producing video and audio essays, based on a thorough study of the given themes. In these he frequently touches on buried layers of memory, whether personal, collective, or (in connection with his previous performative projects) referring to a definite place. The layered images evoked via Rous’s narratives float freely between reality and fiction and resonate uncommonly powerfully with our own experience, posing disquieting questions and forcing us to look at everyday reality from a different perspective. This strategy likewise permeates Rous’s film work. Janek Rous has for many years been a member of the board and editor-in-chief of the internet platform for contemporary art Artyčok.tv, where he also works as a maker of art documentaries, in recent years focusing on social sustainability.

Lucia Sceranková (1985) studied at the Academy of Fine Arts and Design in Bratislava and in Vladimír Skrepl’s studio at the Prague Academy. In her work she almost invariably employs the medium of photography. Nevertheless, rather than as a photographer we think of her as an intermedia artist. She works in an unusual manner not only with the actual photograph but also with its presentation. Sceranková’s photo does not serve only to capture what is seen. She uses it for intelligent play, testing the observer’s capacity for perception. The final shots are normally preceded by construction and composition of the spatial scenes that subsequently she records with her camera. She plays with scale, material, and change of perspective. For that matter, in recent years one can detect shifts in this artist’s increasingly deep critical scrutiny of the impulses forming individual subjectivity, whether their source is in socially conditioned models or in our immediate coexistence with modern technologies.