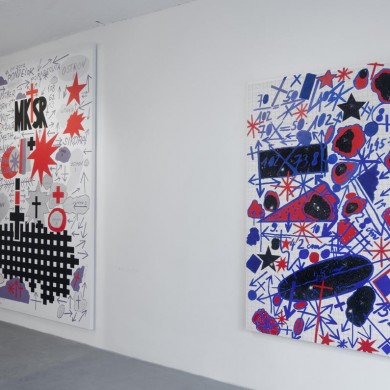 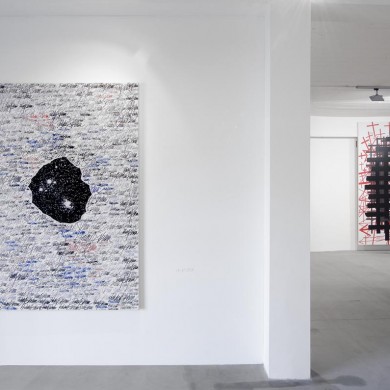 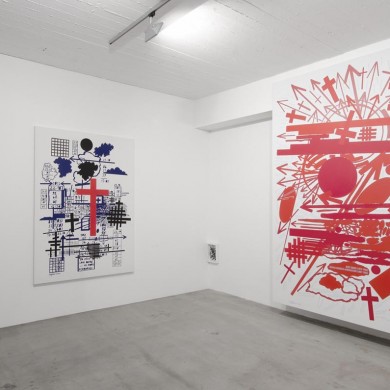 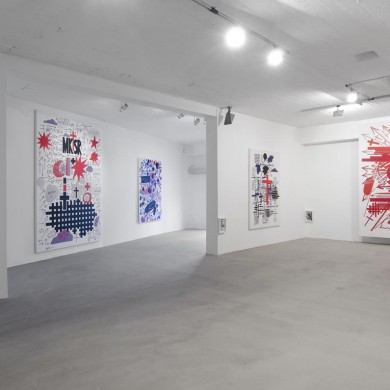 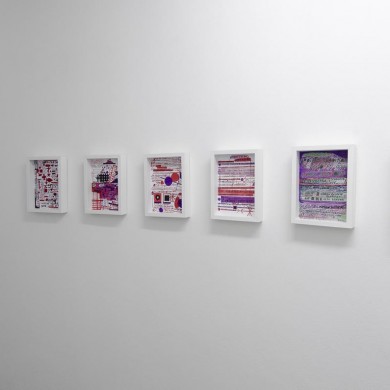 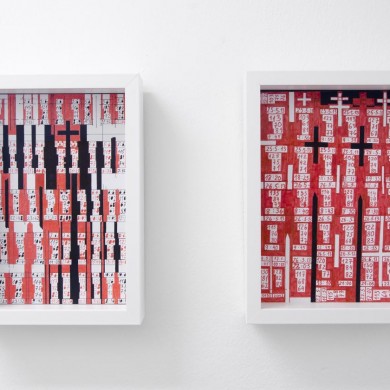 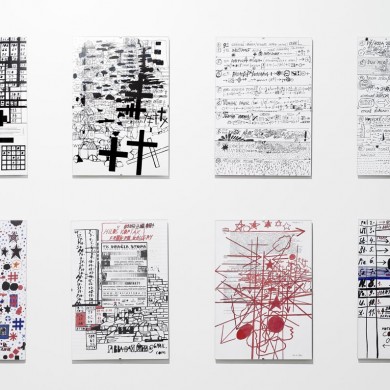 Everyone who is personally acquainted with the Slovak artist Rudolf Sikora (1946) knows that he cannot imagine his life without creative art and – the mobile telephone. The new cycle of works which he is exhibiting is connected quite fundamentally with that gadget. As evidenced in the exhibition title, which he himself devised, these works came into being while measuring blood pressure and phoning. In this instance Sikora, when creating the new series of works, used personal notes, memoranda and drawings which had resulted from other activity, or indeed non-activity. While one hand was occupied with the blood pressure monitor, telephone receiver or mobile, the second hand (for years on end), apart from recording necessary and useful things (blood pressure values, telephone numbers, names, dates, deadlines, meetings…), often worked automatically and subconsciously, drawing, scribbling, jotting down something extra. And here and there revealing more than the author may have intended… His basic material was ordinary waste paper, in every household condemned to be discarded after initial use: faxes, e-mails, invitations, and the square leaves of memoranda pads. Hence the communicative Sikora, who is capable of spending long minutes and hours of his life on the telephone, did not let this time go by, so to speak, uselessly (with the progress of mobile technology he was ultimately able to disencumber both hands, so that he could even paint freely while telephoning).

That Sikora very much and almost always loves to sketch, whenever and wherever he can, has long been a well-known fact and is part of his nature. For him drawing is a “medium of creation”. Though by pedigree he is a conceptual artist, he has always thought and continues to think in images, and he visualises the thought of the work and its specific phases in the first instance on paper. Actually, he has drawn and draws everything – brainwaves, proposals, variants, concepts of works, the works themselves, exhibitions, installations of his works; for him that is by its nature a pictorial script whereby he principally comes to an understanding with himself. Hundreds of the “telephone” sketches and jottings came into being , and fortunately they have not ended in the wastebasket. At a certain moment of creative enlightenment they not merely captivated him but pleased him so much by their characteristically purposeless aesthetic that he resolved to work with them further.

The history of contemporary art reveals that handwritten jottings and incidental sketches have more than once been “elevated” to the status of artworks, or have become the basis of other such works. However, there is undeniable originality, courage and indeed innovation in Sikora’s manner of working with his notes and jottings. How then does the new Sikora image emerge? The basis or background is the authentic leaf of notepaper, which the artists scans and works upon by computer: he refines, blurs, selects, removes, adds, looking upon the leaf as a distinctive object of visual art, but working on it in such a way that the recorded note is essentially preserved. Afterwards he has the result digitally printed onto a primed canvas (according to the parameters of the printer, the artist may choose various magnitudes up to billboard size). The print is finally changed or supplemented by painting, commented on and elaborated with a concluding painterly gesture: this is perhaps the most important stage in the emergence of the image, where the artist’s painting skills can be fully expressed.

Let us take a somewhat closer look at the works exhibited. Apart from authentic notes and notebook leaves, elevated by adjustment to artefacts, the exhibition comprises eight large-scale canvases. The three smaller works emerged rather as a commentary, a note on the five larger ones; in a somewhat different category from the others is I,Universe, created by enlarging his own signature to the point where it becomes illegible (a demonstration of the artist’s well-known humility before the vast infinity of the universe, at which he has never ceased to wonder…). While Constant 1,4571428 is a “repainting” of an old sketch, a draft for a work which was subsequently realised (Observer / Earthling I., 1995), Low Pressure is again an openly-acknowledged notepaper leaf, disclosed and visualised in painterly fashion, which the artist also shows in the immediately adjacent space, in another work of this series, presenting it in large scale behind a grid of bars, thus partially making it illegible. / Katarína Bajcurová