Štefan Papčo (born 1983, Ružomberok, Slovakia) stays true to a traditional sculpture and spatial objects, although he naturally works with a video and intermedia extensions. Recently, he was an artist in residence at Residency Unlimited programme in New York (February – April 2013), where he also won, during the Triangle Arts Association residency (2011) a Best Open Studio award and Grand Prize on the Dumbo Arts Festival. He presented his artworks during a one-year stay in New York in a form of Lucy of the Rocks realisation (December 2012). He was a finalist of the Oskár Čepan Award in 2010 and his participation in the Prague Biennale 6 ends in these days (lasts until 15. September 2013).

Štefan Papčo’s work is closely connected to his main interest in a nature and land. He transformed own boyish adoration of rock-climbers’ heroic performance into a reality, in which the obsession with a climbing became a natural part of his life and work, and we are able to recognize it in topics and visual side of his works. They tend to be aesthetic and even romantic at the first sight, but usually they are hiding a serious topic inside, which relatively increase the artist’s quality. Rock-climbers’ world is risky and directly subjected to the laws of a nature. Solitude of individuals and drawing inspiration from empty valleys contrasts to the strong bound of the climbing team, fighting humbly but bravely againsts the power and unpredictability of the mountain environment, freed from any political influences. By having a physical objects in a gallery, Papčo emphasizes and highlights real experience with a land and he tries to discover and newly define the internal world.

Inspiration by English writer and philosopher Gilbert Keith Chesterton (1874 – 1936), who wrote: “But – in my opinion – all good things aim at the same point.” was the primary impulse to create the exhibition project “All good things aim at the same point”. The concept of exhibition was supported by natural gravity of banal objects which are integral part of climbers gear. Author was amazed by the form of a falling t-shirt that climber dropped during the rising up. Freely falling object in a space loses its original form, thus became abstract and forms a metaphor of time, captures a move and defines the direction of a fall. Falling t-shirt also emphasize climbers’ balance on a very thin line. Author transforms this motion and almost amorphous objects into wood sculptures. He uses similar deformation to transform real objects, which are part of the new cycle All good things… (sleeping bag, t-shirt, trousers and jacket). He is not interested in real prefigure of objects, but he emphasizes their motion possibilities, despite the static predisposition. Complex sculpture installation captures the moment in which all objects fall in the different direction, defining and creating an abstract territory in a gallery space. Gravitation as a law of nature negates the presumption that Papčo is not interested in a series of land-inspired works. / Michal Stolárik 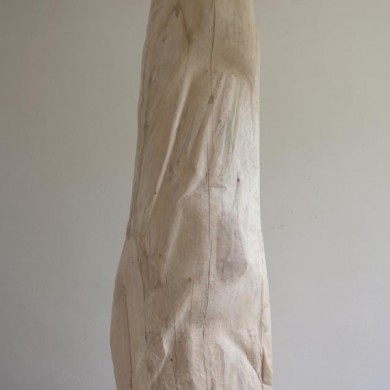 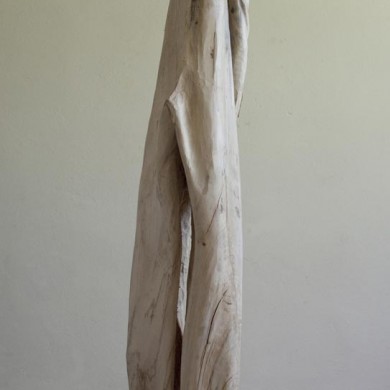 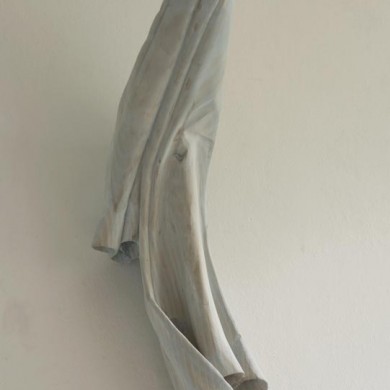 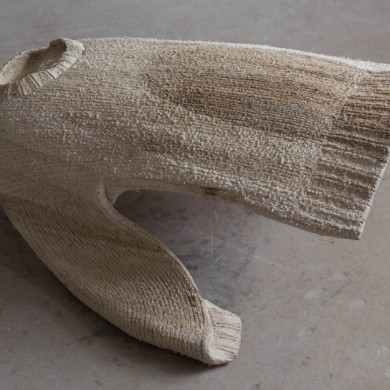 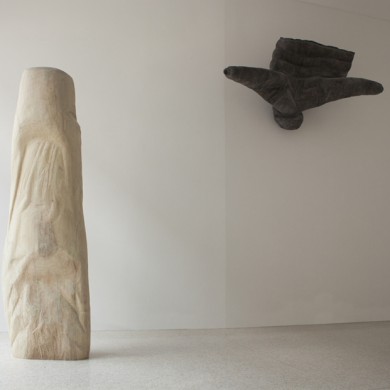 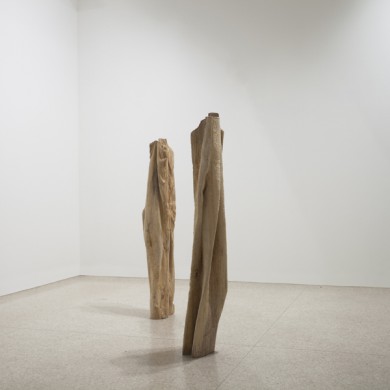