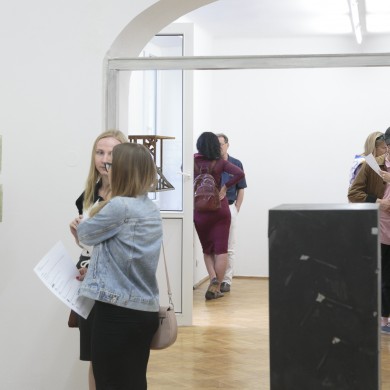 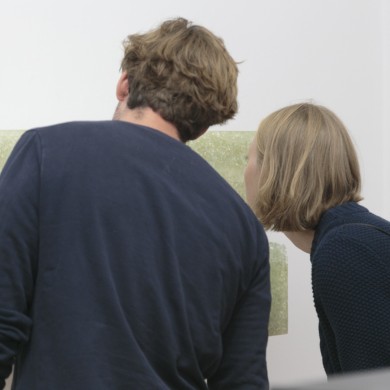 The solo exhibition, by the Slovak artist Štefan Papčo, features sculptures and installations ranging from abstract to figurative, which together offer a unique insight into his artistic endeavors. The works revolve around notions related to the landscape, which, Papčo believes, holds the potential of describing the long-term transformation of local human communities, as well as those related to man’s presence in rough country. Stefan Papčo’s artistic practice reflects his fascination with mountain climbing and the history of Slovak mountaineering. In concord with the motto of one of the heroes of the latter, Pavel Pochylý, that “The impossible is just one of the possibilities,” Papčo tackles themes of extreme experiences and attempts to test the limits of human endurance.

The featured series Cardinality, consisting of installations made of iron, wood, silicone, and glass, focuses on the first of the abovementioned issues – the landscape. The works bear titles borrowed from the names of climbing routes. Those names, often highly sculptural and evocative, originate in the experience of the first encounter with a particular rock face. They bespeak of a sense of respect towards the space, and a desire to make it one’s own. Every first ascent is preceded by a topo – a graphical representation (a scheme or map) of the planned route, outlined using a specific visual language. Combining the poetic names and the abstract sketches, the artist models them anew. The effect is a “mental architecture” – abstract forms executed in various media and comprising a common horizon. Through these resultants of actual space and emotionally-charged name, Papčo seeks to convey the experience of a personal encounter with a rock face, approaching it in its various aspects, from the concrete, material, to the purely spiritual.

Also featured are works from the important series Citizens – a group of sculptures devoted to outstanding Slovak climbers from the 1970s and 1980s. Based on archival photographs, Papčo had produced realistic wood sculptures of climbers resting en route, hidden in sleeping bags. In a processual project that took a couple of years, he placed those sculptures in the mountains, on actual routes that Czechoslovak climbers negotiated. Left against sheer rock, like mementoes of the mountaineers, they are subject to natural forces, the wood “working,” adapting to the environment. Along with the sculpture, the artist left a camera, reviving the past by streaming live from extreme mountain conditions into the safety of an art gallery. Through this gesture, he also alludes to the historical circumstances of rock climbing in Czechoslovakia. Under communism, members of this elite community were among the few citizens able to experience true freedom. Papčo pays a tribute to their willpower, freedom-loving spirit, and striving to push the limits of human endurance.

Štefan Papo was born in 1983 in Ružomberok, Slovakia, lives and works in Bratislava, Slovakia. In 2007 he graduated from the Academy of Fine Arts and Design in Bratislava, Slovakia, in the Sculpture and Space Studio under prof. Jozef Jankovič. His Works were presented in: Kunsthalle Bratislava (2017/2018), Biennale Gherdeina (2018), Regional Gallery in Liberec (2015). He was a recipient of numerous awards and fellowships including Novum Foundation Award (2015), Tatra Bank Foundation Art Award for Young Artist (2013), the Triangle Arts Association scholarship in New York, the Best Open studio and Grand prize at the Dumbo Arts Festiwal (2011). In 2013 he was an artist-in-residence at Residency Unlimited in New York. His works are in the collections of the Messner Mountain Museum collection, Italy, Museum Voorlinden, The Netherlands, Aegidius Collection, Luxemburg, Slovak National Galery and Bratislava City Gallery, Bratislava, Slovakia among others. Represented by Zahorian & van Espen Gallery.