Juraj Kollár (1981), one of the most remarkable Slovak painters of the younger generation, is a kindred spirit of Zahorian & Van Espen Gallery, where he has several times held independent exhibitions. His current exhibition entitled “Out – of – Lines” presents some of his most recent work, with the exhibited pieces being shown for the first time. Painting is Kollár‘s way of life and it is fused with living – surrounding life in all of its facets, things, feelings stirred by them, enter into his art. He works with the classical painting genres: in his production we find landscapes, portaits, nudes, still lifes, figural and animal compositions; he is interested in gestural, geometrical, abstract and “realistic” figural painting. But he conceives and sees them in a contemporary way. Looking more deeply into his pictures, we realise that although he is employing a vocabulary of painting that has been centuries in the making, he is aiming at more than a revaluation of traditions and inheritances. Principally he is exploring the possibilities that painting as such affords him, not only in terms of depicting the given object, its transference to the canvas, to a different language, but above all the vision, the subjective perception and modes of mediating reality by colour (the materiality, or alternatively immateriality, of colour) and by the painter’s hand.

Juraj Kollár’s latest series of pictures is based on a painterly exploration of the structure of the image. He stimulates the surface haptically, with a dynamic and pastose painting by brush and indeed a variety of objects. Kollár uses a net so as to emphasise as much as possible, in a directly physical, material way, the mental perceptions that the seen, registered and subsequently painted image has evoked in him, and he addresses these feelings of his to the viewer. Often the foundation is given by real-life perceptions, obsessive memories, seen events, moments from the media communicated by a film sequence or photo (serving as a kind of sketch). These may be of urban sites, streets full of people, refugees on a shore, the sea and the sky, a beach… or such objects as a head, a pipe… The principle, frequently employed in his works, of dividing the picture surface, has led him here to use the element of a network – grille, which at one and the same time seems to bind, to hold fast, and yet equally to release the painting into the adjacent space, fusing it with that space. By physically coarsening the painting surface, structuring it as a grid, it seems that the painter wanted to negate, to cancel out the “romantic” signature, rationalise it, achieve some distance from it. That is to say, Kollár is not concerned first of all with painterly expression, rather he seeks to emphasise the visual essence and structure of the object and a real experience of it which will remain in his mind. The clarity of the object’s outlines is blurred in the interior of the image; shapes are made optically indistinct and fade away, as if we were looking at the world through slitted eyes, or as if we had come up as close as possible to the surface of the object we were viewing. The image and its objective and corporeal elements thus dissolve into a system of brushstrokes, grids, points and coloured mini-surfaces; items of information are physically crushed into an abstract mass, a grouping, a specific known space, and the situation changes to an abstract landscape, surprising us with a novel view of its micro- and macro-details. It is as if we were and were not in reality – attaining the illusion of an atmosphere, of being in the context of surrounding reality, and simultaneously withdrawing from it, being raised above it and perceiving it with new and disinterested eyes, weighing its spiritual character and gravity. Juraj Kollár, introducing us to his mode of seeing reality and grasping it in painting, shows the extraordinary obsessiveness of an enquirer, but he also shows us the delight of an artist who has not forgotten the primary capacities for “creation” and the aesthetic values of painting. 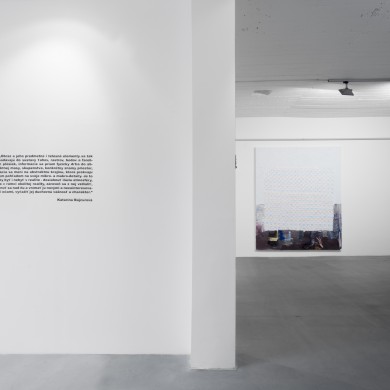 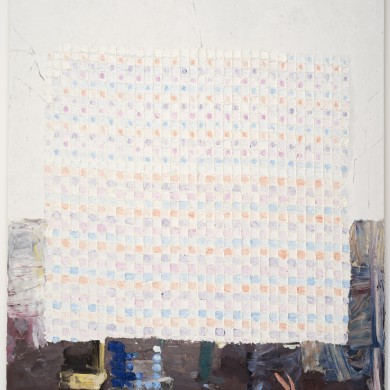 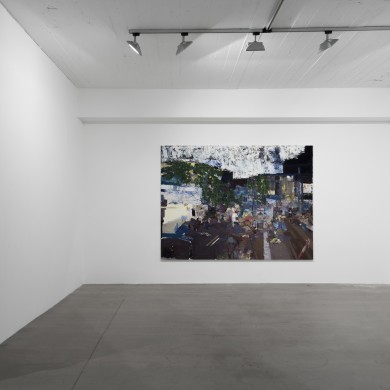 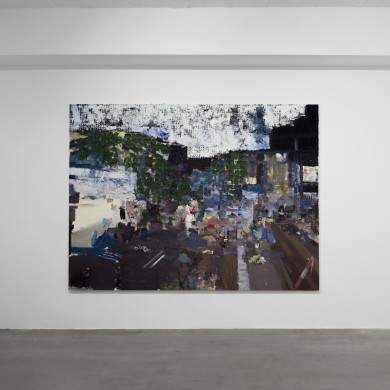 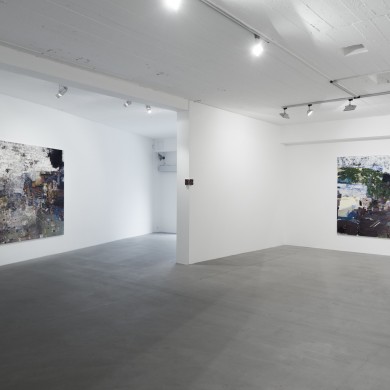 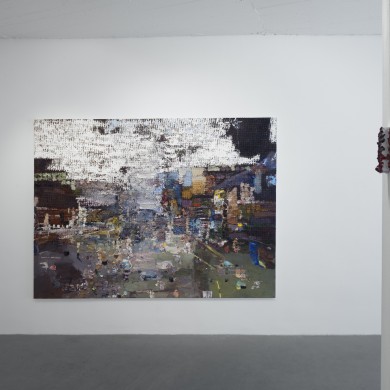