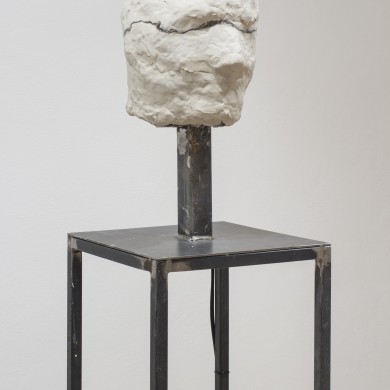 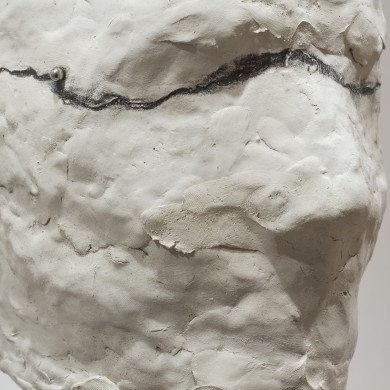 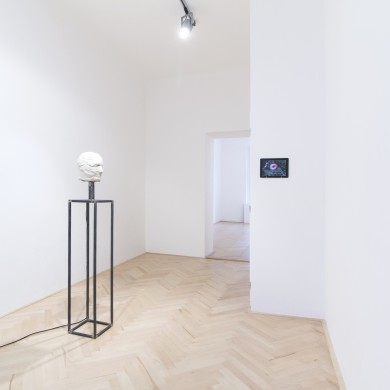 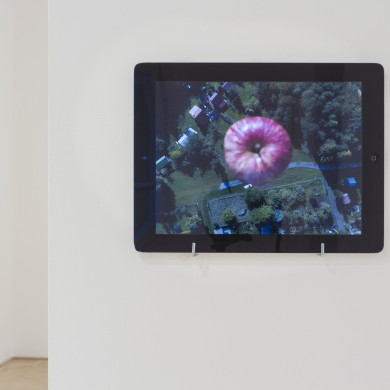 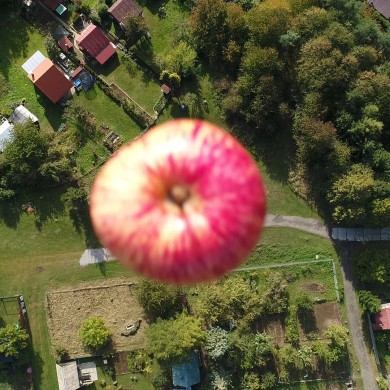 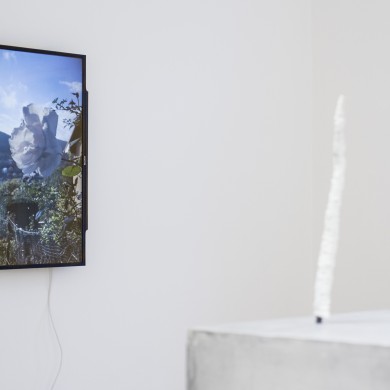 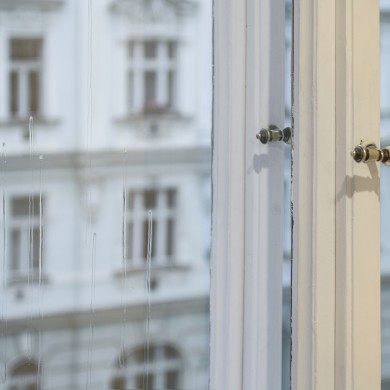 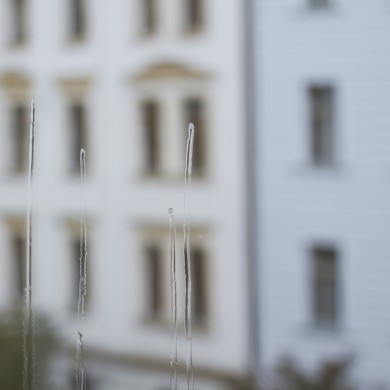 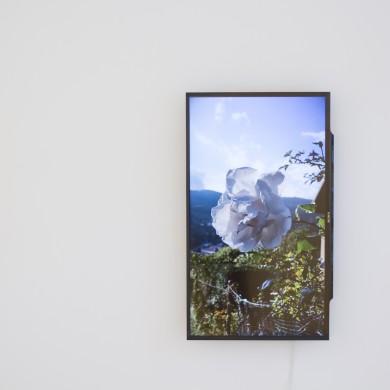 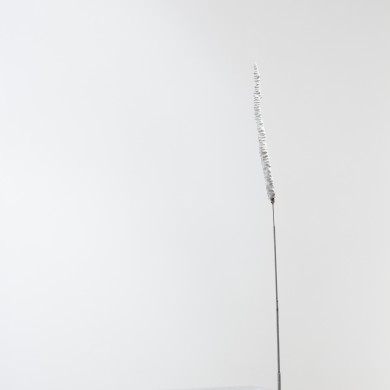 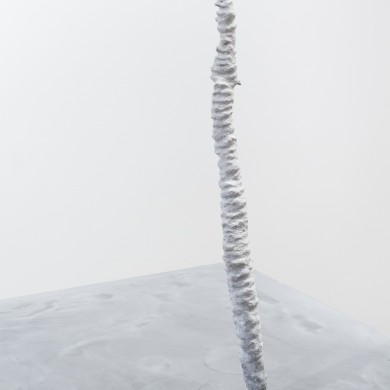 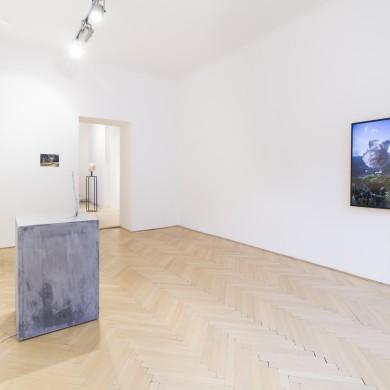 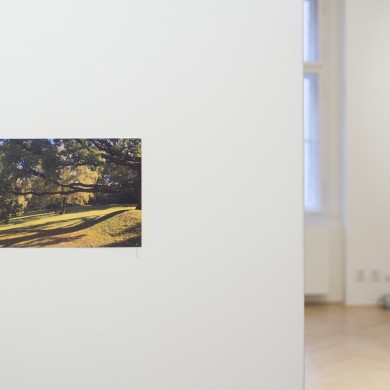 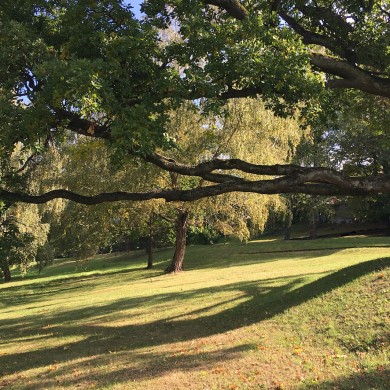 ‘A team of physicists based at a lab near Rome are about to switch on an experiment that could fundamentally alter our understanding of the universe. Collecting data at a facility run by the National Institute of Nuclear Physics, they are searching for a hypothetical particle known as a ‘dark photon’, which, if detected, would illuminate a mysterious, hidden realm that is thought to make up the majority of the universe. Currently, we cannot explain what more than ninety five percent of the universe consists of. As a result, scientists have proposed the existence of hypothetical ‘dark’ forms of energy and matter to help explain the vast gaps in our knowledge.’
- Aristos Georgiou, Newsweek online, 1 October 2018

Quests to fill the vast gaps that remain in our scientific knowledge of the universe – or, more specifically, recent international research into the existence of a new Fifth Force in nature – have been a catalyst for Kyša’s current practice, if only to open up ever-new spaces for poetic exploration.

Using minimal means, he playfully produces disruptions, slippages and gravitational flips, inviting us to question our received certitudes and core understanding of scientific principles. The work in FIFTH FORCE acts subtly as a metaphor for our contemporary geopolitical moment, signaled through meticulously crafted experiments with magnetism and mixed media in motion.

Hybrid objects held together by basic physical laws produce frictions between real, conceptual and fictional spheres. In this way Kyša opens up spaces to reflect on commonly held certainties at a time of increasing global precarity. Throughout the show, where multiple time frames coalesce, gaps, pauses and spaces in-between take equal precedence to materials in motion.

Thus the form and materiality of the work in FIFTH FORCE invites a reevaluation of our relationship with space and time; opening up gaps, cracks, and producing pauses in which to think of physical and psychological reality as more flexible, light and mutable than they might seem. Kyša asks, “Are we as terrestrial beings determined by the laws of physics? Are physical laws firmly fixed and unchanging, or do they evolve over time? How do these laws, as defined by science, relate to time as we experience it subjectively? What is the nature of our connection with the material world?”

The exhibition has taken shape via conversations spanning disparate locations, from Bratislava to Kremnica, Prague and London. It has been an experiment in ways of working and thinking across geographies, inflected by the geopolitical shifts taking place across Europe, whilst sharing inclinations towards the movement of ideas across borders and between disciplines.

Copernicus told us that the earth was not the centre. Darwin told us that man is not the centre. If we listened to the anthropologists we might hear them telling us, with appropriate indirectness, that the White West is not the centre. The centre of the world is a bluff on the Klamath River, a rock in Mecca, a hole in the ground in Greece, nowhere, its circumference is everywhere.
- Ursula K. Le Guin
A Non- Euclidean View of California as a Cold Place to Be, 1982

We follow the precarious yet seemingly inevitable movement of a tiny metal ball bearing around the circumference of a bust cast in plaster. Between the chalky surface of plaster and the solid membrane of the ball, a line is gradually scored across eye level, mirroring our own line of sight.

As we trace these movements, cracks and fingerprints come into focus – traces of overlapping timeframes, where the imprint of a finger meeting soft material meets the slow transformation of the material as it hardened over time. As we are drawn into this circuit and follow its orbit, it becomes apparent that a magnet and revolving mechanism inside the bust must be drawing the ball along. Yet we become conceptually complicit with the work, as a viewer our presence completes the circuit Kyša has set in motion.

The discovery of gravity linked to Newton’s arguably apocryphal apple experiment has remained anchored in popular culture. Here Kyša presents a play on Newton’s experiment. As if magnetically repelled from landing, this apple will never touch the ground.

…Altogether, the risk of estimating the length of human life (of the animals’ we presume not to speak) is beyond our capacity, for directly that we say that it is ages long we are reminded that it is briefer than the fall of a rose leaf to the ground.
- Virginia Woolf
Orlando, 1928

Rose was shot by Kyša in Kremnica, central Slovakia, on 2 October 2018.

Stalactite – from the Greek stalasso, (σταλάσσω), ‘to drip’, ‘that which drips’.
This fragile object accumulated slowly, amongst a cluster of many others, underneath the edge of a motorway bridge on the outskirts of Bratislava. It grew from the residue of grime and grit bound between layers of calcium carbonate as water dripped through surface cracks in its concrete host above, while catching exhaust fumes rising from the road below.

Growing approximately 1cm per year, and at 50cm long, it may be half a century old. Yet formally it echoes stalactites that occur naturally in caves over vast geological timeframes. This condensed, ‘natural’ form made possible by humans has been interrupted and dislocated from its road-side setting; rotated, and set intermittently in motion as a metaphor for growth, productivity, progress and human impact on earth in our current era of the capitolocene.

…In the late twentieth century, our time, a mythic time, we are all chimeras, theorized and fabricated hybrids of machine and organism—in short, cyborgs.
- Donna Harraway
Cyborg Manifesto, 1985

Including the windows of the gallery in the spatial and temporal configuration of the show, Rain, 2018 inhabits an in-between, indeterminate space where reoriented raindrops have seemingly been stopped in their tracks whilst tracing a path upwards. On this translucent threshold, gravity appears to have been flipped and set to work in reverse, producing a liminal space where the inner time frames of the exhibition rest up against views out onto Šmeralova street.

“The point of departure for my recent thinking has been a quest for the etymological and meaningful associations of the concepts of gravitation and time … Scientists speak of zero gravity, micro-gravitation and reduced gravitation; of states in which the physical force of gravity is diminished, restricted or even halted. These states are characterized by a subjective experience of lightness or weightlessness.”
– Jaroslav Kyša, 2018

Time, though it makes animals and vegetables bloom and fade with amazing punctuality, has no such simple effect upon the mind of man. The mind of man, moreover, works with equal strangeness upon the body of time.

An hour, once it lodges in the queer element of the human spirit, may be stretched to fifty or a hundred times its clock length; on the other hand, an hour may be accurately represented on the timepiece of the mind by one second.
- Virginia Woolf
Orlando, 1928

A visual footnote to the exhibition, here no manipulations have occurred. This was an instance of Kyša noticing a seeming gravitational shift in ‘real’ space and time. Simply, accented shadows cast over an old Oak tree allowed a branch to appear to be aligned in a double gravitational shift – the light cast at this time of day impossibility suggesting the branch had grown on a horizontal axis at ninety degrees from the vertical trunk, whilst bearing witness to centuries of industrial, social and political change in rural central Slovakia.